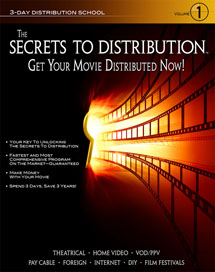 Filmmakers Notebook brings you the second part of our Q&A with Film Distribution Expert Jerome Courshon, who is also the creator of the 3-Day Program “THE SECRETS TO DISTRIBUTION: Get Your Movie Distributed Now!”  As a special bonus to Filmmakers Notebook readers Jerome is generously offering a discount of 20% off the program. In order to take advantage of this special promotion visit http://www.Distribution.LA/notebook.

You talk about “building a pedigree.” What do you mean by this?

A “pedigree” is anything that says “This is good” or “This is valuable” or “This is worth your money or attention.” At the top of the moviemaking ladder, the studios cast A-List actors to headline their movies, because those stars will put butts in seats. The casting of those stars brings perceived value — “pedigree” — to that project. The particular writer of the screenplay can add this too, as well as the director and producer.

At the lower rungs of the ladder, the independent films that don’t have the budget to cast A-Listers, must use other means to bring value and therefore desire by the public to see such films. Documentaries too. The predominant means for these films to build pedigree is through an accumulation of accolades, from positive reviews of the film, to using pull quotes, to interviews the press does with you and/or your actors, to winning awards and so on.

Why must a film really need pedigree you might ask? Simple. There are well over 5,000 movies being made every year. Why do you think your movie or documentary will be one of the limited number the average person will see in a given year? Why would or should they choose yours? Because you ask or beg them to? No. You must give them a reason to see your film, and a reason to spend 1.5 – 2 hours of their time on your creation. You must develop a perceived value that your movie is going to be a heck of a good time, or enlightening, etc.  Or that your documentary is important, or eye-opening, or a valuable contribution to the social discourse, etc.

Building a pedigree helps tremendously with achieving this. And it is used every single day by distributors to sell movies, but most people — even filmmakers — are unaware of this.

I read that you consider key art to be critical in securing a distribution deal. Why do you consider it to be so important and are there any avenues you advise filmmakers take in order to be sure they’re on target in this area?

It’s not only important for helping get interest from distributors, but if one wants to DIY their film into the marketplace, it’s just as important there. The reason is this: When you can communicate what your film is about, and in an interesting way through your key art, you have captured interest — even if only for a brief moment — from the person seeing the movie poster. And once you have someone’s interest, you’re on your way to selling a ticket, or a DVD, or a VOD viewing. Or selling a distributor who immediately gets visually what the movie is about, and then knows he/she can sell it to the public.

People do not buy what they do not understand. It’s amazing (and shocking) how often I see key art from independent filmmakers that is vague, uninteresting, and/or poorly executed. You do not have the luxury of 5 minutes to personally and passionately communicate to the proverbial man-on-the-street what your movie is about. You have one second or less to catch their attention, and then a few more seconds to “sell them.” Sorry if this answer seems so “sales oriented,” but the reality is most independent films do poorly in the marketplace because too many Producers & Directors don’t understand what moves people to buy a movie. They just think everyone will love what they have given birth to and love themselves. But this is not the case.

The best piece of advice I can give filmmakers, is do NOT create your own movie poster. Unless you’re also a graphic artist professional, don’t do it. Hire a pro for this, and you then work with them on creating a good/great concept, and have them execute it. When I was working at HBO Films, each new film would have many, many comps (concept drafts) created, for the President, his team, media relations and marketing to look at. I remember one particular film had about 20 concepts, which may seem like a lot for a cable movie. But just because many millions of people pay a monthly subscription to get HBO, doesn’t mean they’re going to watch whatever new original movie HBO makes. Yet HBO wants subscribers to watch their original movies, and good key art helps them achieve this.

Do you have any tips for filmmakers planning to self-release their movies with regards to theater selection, promotion and audience demographics and attendance?

Theater selection is very important for a self-release or any small release, for a number of reasons. Primarily, you are looking for some kind of success here, whether it’s attendance numbers, or box office numbers, or press coverage. Unless one is doing a “vanity release,” but if that’s the case, that would be a poor use of money & resources in my opinion. There are other, less expensive ways to satisfy one’s ego than to book a theatrical run for a week or longer.

To increase your chances of success, here are several criteria I recommend paying attention to when booking your theater(s):

Reputation of Theater:  What kind of film have you made, and does it “fit” with the type of movies normally booked in that theater? This is important, as you want to be in a theater that’s supported by an audience accustomed to seeing the type of film you have. If you’ve made an art house film, you want to (usually) get booked in theaters that show art house films. If you’re booked into the multiplex that typically shows studio blockbusters, the “art house crowd” won’t find you.

Demographics:  Similar to above, what kind of neighborhood are you booking your run into? Does the kind of film you’ve made have any inherent resonance with the community that theater is in? If you’ve made, for example, an ethnic-flavored film about the immigrant experience, I would not advise booking such a film into upscale, high-wealth neighborhoods. Why? Because an upscale neighborhood is multiple generations removed from the immigrant experience. Will some go if you were to book it there? Of course, but I would rather run the film where I can get a larger audience more organically.

Typical Attendance:  What kind of box office numbers does the theater typically do? Do they get good attendance for the movies there? Or are they a low-performing theater? Find out. If people don’t frequent that theater, why would you think they’ll go to see your film? Because you’re going to do massive marketing? The per-screen average for a typical movie is $2,000 per week. If you book a theater that only does $500 in any given week, that’s going to be a problem as their low attendance will impact your results.

Neighborhood Foot Traffic:  Are the theaters you book into ones that are in areas that have a large volume of foot traffic? Such as next to malls, shopping plazas, etc.? A popular theater complex with a flow of people always coming? Or, are the theaters removed from areas of significant foot traffic, and/or the only way people can get to them is to drive a bunch of miles? This will seriously impact your results, and you ideally want theaters that have a high volume of traffic for this simple reason: A percentage of that foot traffic will see your poster in the marquee and buy a ticket, or will respond to you (and your intern assistants) standing in front, pitching them on seeing your film.

Despite ALL the marketing you may do, from social media online, to traditional PR, to getting reviewed by the local papers, to going on the radio, do NOT underestimate the power of the grassroots marketing play of stationing people at the theater’s entrance to pitch and entice people to see your film. You will be surprised at how effective this is at increasing your box office numbers. Just be sure if you have others doing this for you, they understand the film, the film’s background, etc., and can actually engage people about it. Many people will ask questions when bubbly, friendly help hand them a flyer and say, “You should see this movie!”

And here’s something many of us Producers/Directors don’t realize. We frequently decide what movie we’re going to see, before even heading to the theater. Not so for many Americans, who will go to the theater and stand in front to figure out what film they want to see. They know roughly what time most films start, which all start within a relative window at the local multiplex. So you’ll see people standing there, saying to their date/wife/husband, “What do you want to see, honey?” “I don’t know, what do you want to see?

Despite all the marketing and even newspaper advertising I did when I opened my first movie in New York City, my most effective strategy was to stand in front of the theater — which had a high volume of foot traffic (the Regal Union Square Stadium 14) — and sell people on seeing my movie. Granted, I didn’t have time to do a lot of this, but I had a team of interns from NYU film school working the theater daily.

During my theatrical run, I would go to the other theaters to promote too. (Which isn’t as effective, of course.) One day, I happened across one of the principals of Lot 47 Films (a small but respected distributor at the time, whose principals were known in the industry, having hailed previously from October Films). He was literally outside the theater where a film they were distributing was playing, doing the same thing I was doing and chatting up people. From inside the theater snaked an electrical cord to the sidewalk, where he also had a laptop cycling the trailer repeatedly. This was one of the heads of the distribution company! 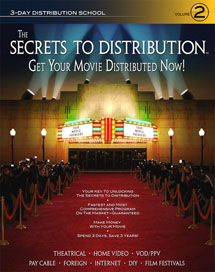 For those who read IndieWIRE, there’s periodically a story about some filmmaker who’s opened his/her movie somewhere, and has created a spectacle of some sort, either opening night or for the run of their film. In areas of high foot traffic, this is extremely effective. If you can do this, do it. If not, then you and/or your help should be at the theater talking up your film to passersby and those coming to the theater. Of course, get permission from the theater manager first, but if you’re not an “arrogant filmmaker” with the theater and its staff, they will bend over backwards to please you, because they don’t get to meet actual Producers or Directors very often.

We still have Part 3 of this Q&A with Jerome to look forward to, but in the meantime you can follow him on Twitter @Distribution411 and check out his bio posted below.

Film Producer & Distribution Expert Jerome Courshon knows the ‘game’ of distribution as a Producer in the trenches. From his film festival journeys to self-releasing his first movie into theaters to securing distribution with Warner Bros., Courshon has faced innumerable obstacles. And it’s this real world “what works, what doesn’t” approach that he is able to share with fellow filmmakers to help them attain success. For over the past 6 years, Courshon has assisted hundreds of Producers & Directors with achieving real distribution through his classes, speaking engagements and consultations. For more info about him or his 3-Day Program “THE SECRETS TO DISTRIBUTION: Get Your Movie Distributed Now!” visit: http://www.Distribution.LA